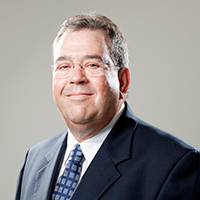 Dr Farmer is a vascular and endovascular surgeon. He is the Head of Vascular Surgery at St George (Public) Hospital.

He studied undergraduate medicine and surgery at the University of New South Wales, graduating in 1977. After completing his internship and residency at Prince of Wales Hospital, he trained as a surgeon at St George (Public) Hospital. His overseas training in Britain included vascular and transplantation surgery.

His main interests include thoracic and aortic aneurysm surgery and endovascular repair, peripheral endovascular intervention, including carotid stenting, and endovenous therapy including laser ablation. He has a keen interest in non-invasive vascular investigations.